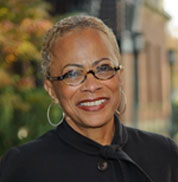 Carol A. Goss is a fellow in the Advanced Leadership Initiative program at Harvard University. Prior to joining Harvard, she served as president & CEO of The Skillman Foundation, a private independent foundation whose mission is to improve the lives of children in metropolitan Detroit by strengthening their schools and neighborhoods.

Involved in philanthropy for the past 20 years, Carol joined The Skillman Foundation in March 1998 as a senior program officer. She was named president & CEO of the foundation in 2004. She has also worked as a program officer at the Stuart Foundation in San Francisco and as program director at the W. K. Kellogg Foundation in Battle Creek, Michigan. Carol was named the 2007 James A. Joseph Lecturer by the Association of Black Foundation Executives. Crain’s Detroit Business cited her as one of Southeast Michigan’s Most Influential Women, an honor that the respected weekly bestows every five years to the region’s most dynamic and powerful women.

Carol’s professional career also includes nearly 20 years’ experience in child welfare, family services, and youth development in Detroit and Oakland, California. A native Detroiter, she has a B.A. degree in sociology and an M.S.W. degree from the University of Michigan in Ann Arbor. She retired from The Skillman Foundation at the end of 2013.

In 2011, Carol won City Year Detroit’s “Idealist in Action” award and Olivet College’s Leadership in Individual and Social Responsibility Award. The Detroit News named her a 2010 Michiganian of the Year; and in 2009, Grantmakers for Children, Youth & Families honored her with the 2009 Fred Rogers Leadership Award. In 2008, Carol was selected as the Eleanor Josaitis “Unsung Hero” recipient as part of the Shining Light Awards. The Shining Light Awards, launched in 2007 and sponsored by the Detroit Free Press and Metropolitan Affairs Coalition, “honor individuals who are making important contributions to regional cooperation, progress, and understanding in metropolitan Detroit.”

In her free time, Carol sings in her church’s choir and is an avid runner. “Running helps me stay healthy and also helps me put things into perspective.”